One of the best things about the Surface Pro 3 is its pen. It’s changed the way I take notes, brainstorm and review PDFs. As useful as the pen is, however, I can’t help but think its implementation in Windows is a half-measure.

Currently, the pen’s behavior is different depending on where you use it. In the operating system parts of Windows and in programs like Word, the pen is a mouse replacement. Then in certain apps like OneNote, it acts like a pen that you can draw with. You can mark up PDF files, but not JPG or DOC files.

This specificity is fine for knowledgeable users, but for casual users it’s confusing to remember what the pen can be used for where. If there’s no clear sense how a tool will be used, chances are it won’t be.

For the pen to ever have mainstream adoption, it should be used consistently no matter where you are, like the mouse or keyboard. Ideally, you should be able to write, draw and mark-up with the pen everywhere. The pen doesn’t ever need to be a mouse replacement.

It made sense in a pre-touch world, where the pen was needed to be a navigation device. If the pen couldn’t be used to navigate, asking users to switch from pen to mouse and back again would have been an unbearable hassle. In that pre-touch world, a pen is more stylus than actual pen.

That’s changed with Windows 8, especially on the Modern side, where using a pen to draw and then using a finger to navigate is not only easy, it’s actually intuitive. The only unintuitive part is that the canvas is limited to only certain places. There’s a huge opportunity for Microsoft to fix this and make the pen great.

You’re probably asking why this is necessary. Two reasons: 1) To demonstrate the pen can be used anywhere. 2) A quick way to take notes. In addition to the standard screen cap, these notes can also be saved, archived and searched, just like if it was drawn on OneNote. 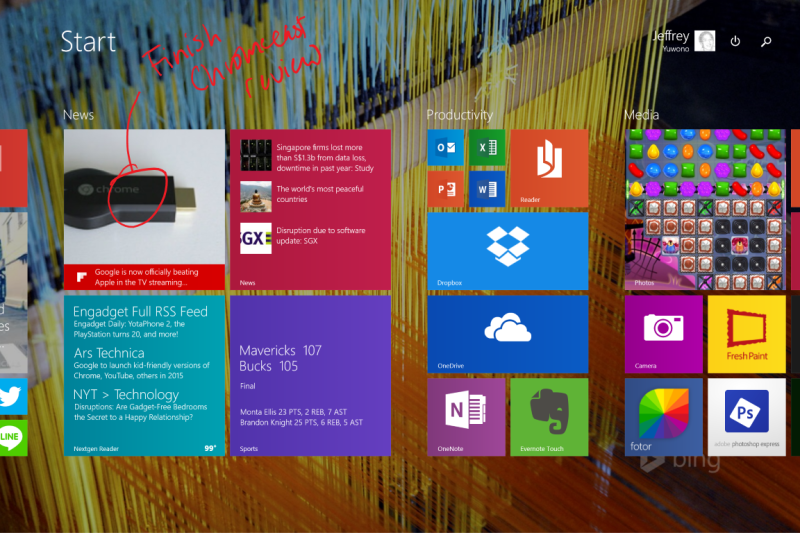 Needless to say, the scribblings can also be deleted; with the button on N-Trig pens, and the “eraser” nub on Wacom pens.

I’d like to see something similar with Microsoft Office. I should be able to type with a keyboard and then reach up with a pen and mark up the document. 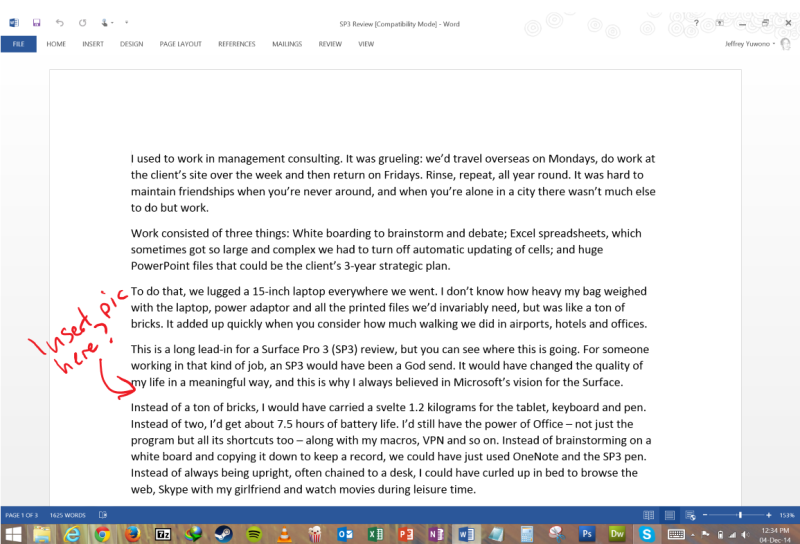 When I return to the document the next day, my scribblings should be saved. I should be able to search for them later too. Options to hide or print them all would be great.

How about a non-productivity related use case — being able to write or sketch on photos.

A handwritten note to a photo can add a personal touch that you might treasure as much as the photo itself. In the current implementation, I have to import the photo into a program like OneNote just to write on it. How great would it be if I can just mark up an image from anywhere?

I’m sure the technical implementation won’t be easy, and it’ll probably have to be done in stages, but the end goal is worth it. Moreover, it’s a unique competitive advantage that other platforms like OSX, iOS and Chromebooks cannot easily replicate.

Steve Jobs once famously said that if you need a stylus, you’ve failed. I completely agree. A stylus is half-pen, half-mouse, with a confused nature that only the most committed will understand.

But this isn’t about a stylus, this is about making the pen great.

You can get a lot of computing for just $200