Along with the Nexus Player, which disappointed, Google’s Nexus 9 was also recently released and reviewed. It’s been described as having an OK display; good but not jaw dropping performance; above average speakers; nice feel but with small, noticeable flaws; and generally not something that beats the iPad given its $400 price. Lollipop is awesome as expected.

That’s all well and good, but there are two things about the Nexus 9 I was particularly interested in from an industry point of view:

Is the 9-inch display the best of two worlds, or the worst? Is the Nexus 9 an appreciably good productivity device? 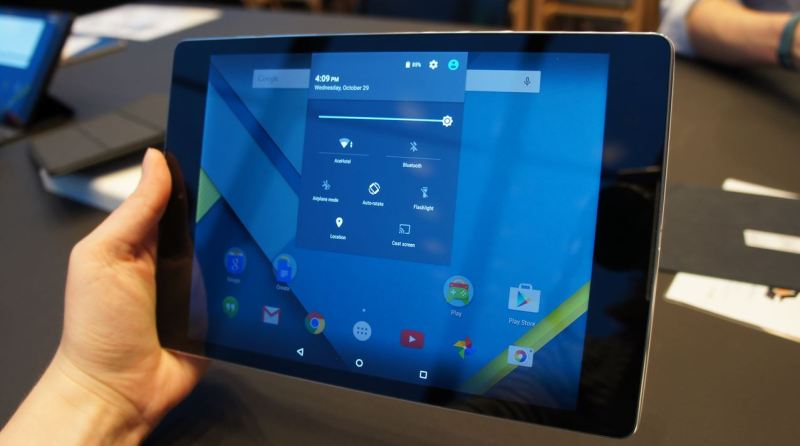 Google chose an unusual 9-inch display size that was neither here nor there. Why? My guess: Google wanted to make a tablet light enough to use with one hand, yet large enough to justify owning even with a phablet. Unfortunately, according to The Verge, the Nexus 9 falls short.

It’s virtually the same weight as the Air 2 and noticeably heavier than the mini 2 or 3, so it can be tiring to hold in one hand for long periods of time. Given that the Nexus 9 doesn’t offer any apparent physical size advantages over the Air 2, I’d rather have the iPad’s larger display than the 9’s jack-of-all-trades compromise.

Long time readers know my position: there will be two classes of tablets, those held primarily with one hand and those held with two. Mini tablets are in the former, but with the rise of phablets, there’s less need for them. Apple is trying to make the iPad Air light enough to qualify but so far failed; as has the Nexus 9.

The iPad mini weighs just above 0.7 pounds, so a tablet probably needs to be lighter than 0.8 pounds to qualify for one handed use. Unfortunately, the Nexus 9 and iPad Air 2 check in at more than 0.9 pounds. Try again next year boys.

If you can’t make the weight, tablet makers should go for a display as large as possible given a weight threshold. For my taste, 1.5 pounds is the heaviest a tablet meant to be held with two hands should be. So a 1.8 pound Surface Pro 3 is too heavy while a 1.5 pound Surface 2 is just fine.

If I need to hold a tablet with two hands anyway, I’d rather trade-off weight for a larger display size up to that threshold of 1.5 pounds. You can be exponentially more productive with a display large enough to enable split screen multitasking. Games, videos and Internet browsing are far better too.

My suspicion is that this is where the rumored 12- to 13-inch iPad Pro will land — a laptop-level display size that weighs less than 1.5 pounds. We’ll see if Apple and I agree. 🙂

And then in a few more years, maybe even the 15-inch, 1.5 pound tablet that I believe will be the most popular device type in America. One paired with a capable keyboard cover. 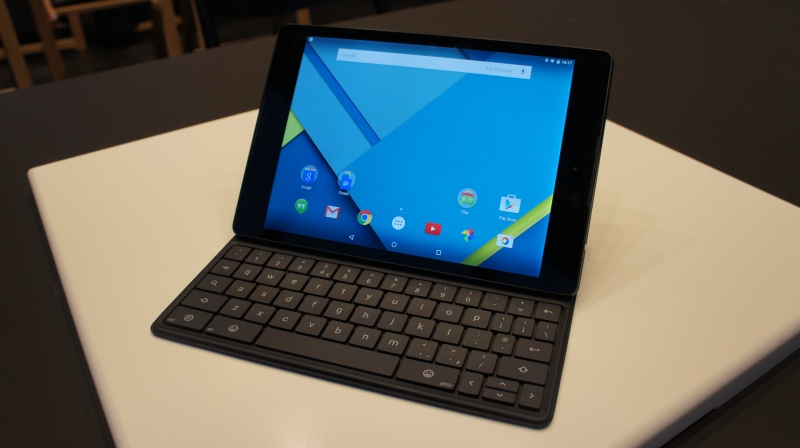 Google is already onto that vision. The Keyboard Folio accessory is Google’s interpretation of Microsoft’s Surface and Type Cover. It’s a keyboard built specifically for the Nexus 9 and doubles as a cover. Unfortunately, most reviewers don’t have it yet, but Expert Reviews did get their hands on one and gave it a positive review:

Naturally, the keyboard is only as long as the tablet, so typing can feel very cramped at first. The keys provide plenty of tactile feedback, though – much more than any of Microsoft’s Surface Pro 3 tablet keyboards, for example, – so you can always be sure you’ve hit a key correctly. It works surprisingly well with Google Docs, as you can just open a document and immediately start typing. This gives it more than enough potential to encroach on Microsoft’s Surface Pro market, and it doubles up as a cover to protect the screen when you’re not using it as well – connecting magnetically to the tablet. However, the keyboard will set you back another £110, which is around a third of the price of the basic tablet.

I wonder whether the better key travel came at the expense of weight and thickness?

With the Nexus 9’s smaller footprint, it’s no wonder the keyboard felt cramped. Google made a mistake in choosing a 9-inch display; if they had gone with a 12-inch display, kept the weight below 1.5 pounds and paired the tablet with a similar quality keyboard, this could have been a capable laptop replacement.

Overall, I am a big believer in this converged form factor. I see it more and more everyday in cafes and conferences; people carry their light and long-lasting tablets and pair up with a keyboard to do work in a pinch. The Surface was a little too early, but Google must feel the time is right to jump in with their version. It’s too bad the tablet itself received such lukewarm response.

I’d love for Apple to create their own version of the keyboard cover for the iPad Pro.

Toasters and refrigerators are meant to be together.

Microsoft made Office free for mobile, and it's for the kids