I have the Chromecast and some things are awesome on it. Unfortunately, it’s a limited device in that strictly speaking, the Chromecast doesn’t mirror content, it streams from the web. This means that outside of a few phones, you can’t project games to your TV, which I’ve argued could disrupt the games industry. It also means you can’t project your PowerPoint presentation to the TV.

That changes with Microsoft’s Wireless Display Adapter (awful, awful name). It uses the Miracast standard to mirror your Windows and Android devices to the TV so you don’t even need Wi-Fi to make it work. Check out the video to see how Microsoft wants you to use it:

There are some interesting use cases there.

Gaming is the obvious one. I don’t know what lag is like — Gizmodo says there is some but Jetpack Joyride was playable and still fun — it just needs to be good enough to make casual games work.

How about using it as a presentation tool? If this works reliably enough, I’d much prefer that to a cable, which requires you to be close to while presenting. A presentation in combination with the Surface Pro 3’s pen would be devastating — we could have a brainstorm and mark-up the document in real-time. That’s really useful.

Another interesting application is travel. Instead of bringing an HDMI cable and awkwardly plugging it to your hotel’s TV to watch a show, you can simply bring the dongle.

Even better, as seen in the video, the adapter seems to have Chromecast’s ability to start a movie on TV and then use your phone/tablet/laptop to do other things. So it’s not just like the various Miracast devices that already exist on the market. My guess is Microsoft’s dongle will stream Chromecast style for compatible apps (like Netflix) and mirror via Miracast other times. 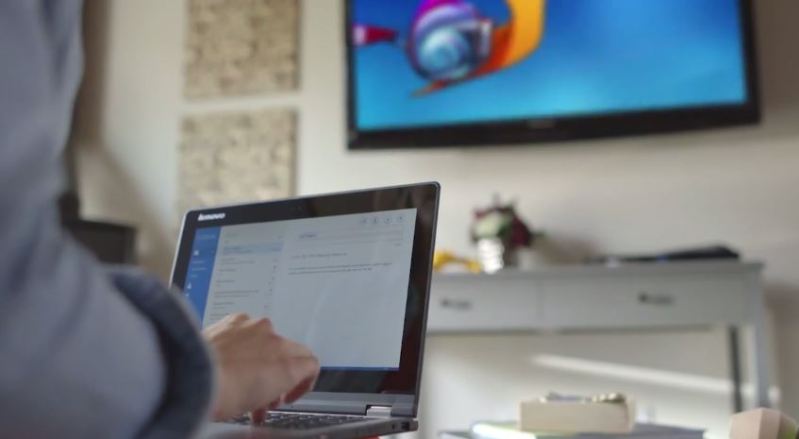 Miracast works on Android as well; most if not all Android 4.2 devices will work with Microsoft’s dongle.

It’s more expensive at $60, but I’ll be picking one up when it launches next month. Will post a review then.