I’ve had the Surface Pro 3 for less than a week, but unless things change by the next, I will be returning the device. As you can tell from my first impressions post, I loved it, so what brought the change of heart?

Three things. First, the tablet gets unbelievably hot frequently and when it does it’s incredibly uncomfortable to hold. It’s not much of a tablet when you don’t even want to hold it. What kind of tasks, might you ask, was I doing while its vapor magnesium was brought to a boil? Intensive, taxing stuff like web browsing, email and OneNote of course.

Second, the battery life isn’t great. I’ve consistently gotten 6 hours of screen time. This is on a balanced power plan, 37% screen brightness and sleep after 2 minutes of inactivity. I was expecting 9 hours of battery so 6 is disappointing.

Third, there’s something funky with the WiFi. Sometimes the connection is just awful slow and it’s not the fault of my connection; a reboot fixes it. 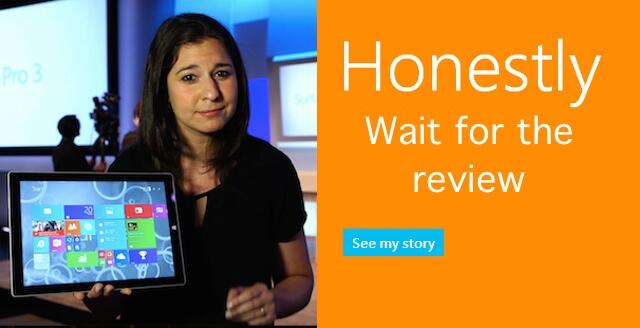 I might be able to accept the lousy battery life and unreliable WiFi if it wasn’t for the heat, but taken together they are a deal breaker.

Actually, no, the overheating is itself a deal breaker. This isn’t the software bug for Core i7 versions which Microsoft already acknowledged. This is good old fashioned hardware setting itself on fire. My sweaty, boiled hand stands witness.

That’s unacceptable considering the $1600 price. This is supposed to be a high end, premium device. I was curious though, because reviews on many tech sites did not mention these things. Did I just get a lemon?

After some research and experimentation, I think I’ve identified the root of my first two problems: Microsoft Windows Search Filter Host.

The purpose of the search index is that it enables Windows to find files instantly, instead of needing to scan hard drives each time you search. Conceptually, it makes sense: index when the PC is idle for long-term performance gains; reduce or stop indexing when the PC is in use so it doesn’t interfere too much. Once the index is built, it requires minimal resources to maintain.

Unfortunately, that’s not the way it works in practice. It’s been a week and the search index on my Surface Pro 3 is still not complete. Does it really take longer to index than actually download? Moreover, the index continues to build even when the PC is performing tasks and takes 30% CPU usage doing it. Continuously. You can see why this might cause the tablet to get hot, and why battery life is drastically shorter as a result.

This theory makes sense. I synced nearly 80 GB of OneDrive data to the Surface Pro 3 along with 5 sizable email accounts in Outlook so there’s a lot to index, whereas most reviewers may not bother going through that deep of a set-up.

When I paused the indexing process, CPU usage fell to less than 2%.

For the sake of Microsoft’s bottom line, I hope my hypothesis is correct. That once the index is done building, the fan won’t kick in so often and the tablet won’t feel like molten hot lava; and that battery life will be closer to what Microsoft advertised.

Update (September 4, 2014): The search index continued to be an issue even after indexing completed. I added a new Excel file on my five year old desktop PC with Windows 8.1 and it indexed in seconds. I added the same file to the Surface Pro 3 and it took 45 minutes! I may have found the root problem and solution — get the details here, but in short, installing Adobe’s iFilter 64-bit may have fixed it. I’ll need more time to test it and will post back.

On Channel News Asia today to talk about Kiosked