I’ve made it plain on this blog that I’m a fan of the Surface concept, despite its flawed unveiling. Yes, the same Surface that lost Microsoft over a billion dollars. This must mean the concept sucks right?

Well, no, it it’s not because the vision is flawed, it’s the execution and timing that weren’t right. The first and second Surface Pros were too early — the hardware wasn’t ready to deliver the vision. The first Surface RT was just plain bad. I thought the Surface 2 was ready for primetime, if not for its Windows RT roots.

Timing aside, I’m a fan of the concept because convergence will happen between laptops and tablets, just like the telephone, camera, MP3 player, GPS navigation and PDA converged into today’s smartphone. Microsoft absolutely has the right idea with the Surface; just a few years’ early.

So, does the Surface Pro 3 do it? I’ll want to use this bad boy for a few weeks before concluding anything. My initial impression is that it falls just short for the mainstream; it’s too expensive and the form factor is a hairline from perfect.

Fortunately, it still hits the mark for someone like me. I’m loving the Surface Pro 3 so far.

Oh, the screen. It’s gorgeous. Every laptop display needs to have a 3:2 ratio – the viewing space is so much more usable. Going from 10.5-inches to 12.0-inches makes a big difference for productivity.

The pen is a revelation; I got the Next Great App sketched out with it on OneNote. With the hinge fully extended, the tablet becomes a fantastic drawing pad. Awesome. I love that pressing the pen’s button launches OneNote, and prefer the erasing implementation for N-Trig over Wacom.

The Type Cover actually feels better. I’ve read people complain about the Type Cover’s trackpad but I think it’s great. I’m happy with my choice of the deep blue cover – it looks great.

The set-up process with Windows 8.1 is fast and painless. My settings on the Modern side were seamlessly synced. 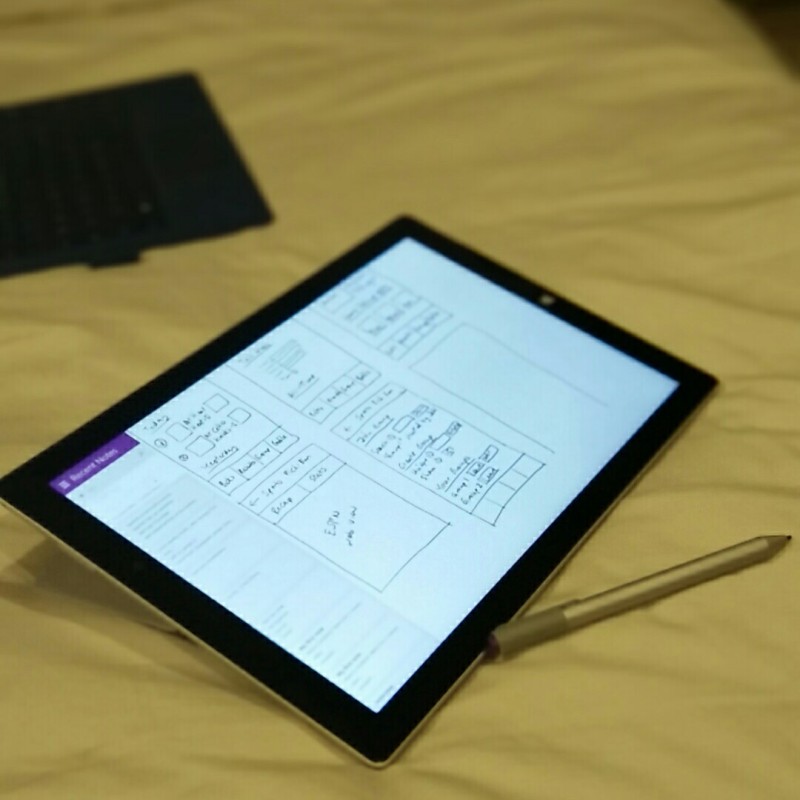 The upper-right side gets blazing hot. I understand at the start there’s a lot to index and download, but still. This is what I mean by the hardware being a tad too early — the next generation chipset, Broadwell, will dramatically cut down on heat.

I was wrong in stating that 2 pounds is a threshold for a tablet’s weight. The Surface Pro 3 is 1.76 pounds, but it should be 1.5 pounds and below. The combined weight of the tablet, keyboard and pen is noticeable in a way that the Surface 2 and cover is not. Still light enough to carry casually, but it could go on a diet.

Nowhere to satisfactorily put the pen. The pen loop thing is OK, but it’s not awesome.

The new power connector isn’t that big of an improvement from the old one, so I’m annoyed the back-up power adaptor I have in the office (for the Surface 2) can’t be used for the Surface Pro 3.

Rough edges in the software. The Surface Pro 3 already froze on me. The early iPhones and iPads were similarly rough, but Microsoft has to realize in today’s world the Surface competes with rock-solid, mature alternatives.

The Surface Pro 3 has a two week return window in Singapore. Will I keep the device by then?