I’ve wanted to write this for some time, but hadn’t because there was no solid data to back-up my assertions. I do now. This is about why I believe the future of tablets (and by extension, computing) is 15-inches in display size.

Let’s start with the origins of the modern tablet. The original iPad played such a strong role in shaping our perception of what a tablet should be, including a 9.7-inch display that we think of standard today. Apple arrived at that size because 9.7-inches was ideal given technology’s constraints at the time like weight, battery life and cost. It was the right size for 2010.

The iPad was never designed to be used primarily with one hand, unlike “mini” tablets of today. As Jobs demonstrated in his keynote, the iPad was meant to be used on the lap; or held with two hands; and only occasionally holding with one hand so the other can perform an action.

By reducing the weight of the iPad Air to just 1 pound, Apple nearly made the tablet light enough for one hand use. But even at that reduced weight, the iPad Air is still too heavy to replace mini tablets for one hand use. Apple might get there eventually, and when they do it will completely cannibalize the iPad mini.

Let’s get back to the assumption that tablets don’t have to be light enough to be held with one hand. If we can keep weight below a certain threshold — light enough to occasionally use with one hand, but not so heavy that it no longer feels like an iPad-like tablet even with two — what is the best display size for a tablet?

We can find the answer in the laptop market. Dan Seiffert wrote an excellent piece on The Verge about why Chromebooks should have a 15-inch display, and that’s because 15-inch displays are far and away the most popular in America.

As you can see, 15-inch laptops comprise a whopping 69% of the US market. 17-inches is the next most popular size at 12%. The Surface Pro, along with all the hot Ultrabooks the tech media loves to write about, are all in the minority.

There is corroborating evidence from this Engadget article:

According to Kevin Frost, Vice President and General Manager of Consumer Notebooks Business Unit [at HP], 15-inch is currently the most popular laptop screen size in the US, while the folks in China prefer 14-inch offerings. Oddly enough, Kevin wasn’t keen on explaining this phenomenon, but he added that 17-inch laptops also do well in Europe and the US, but not in China.

The next question is why those sizes are popular. Why not 13-inches, which we geeks tend to prefer, like in the MacBook Air? One hypothesis is that we value mobility in a laptop because for bigger productivity tasks, we have a desktop PC with large screen monitor. Or at the very least, we can connect the laptop to one. So for us, the extra weight of 15-inch laptops does not justify the extra real estate.

Whereas for the majority, the 15-inch laptop represents their one computing device, so the screen needs to be large enough. That’s fine, and still supports our central thesis: a larger display is preferable, all things equal. If there’s no weight penalty, bigger is just better.

These delineations are not arbitrary:

In other words, a one-inch increase in display size with today’s technology roughly corresponds to an increase of 0.2 pounds in weight. 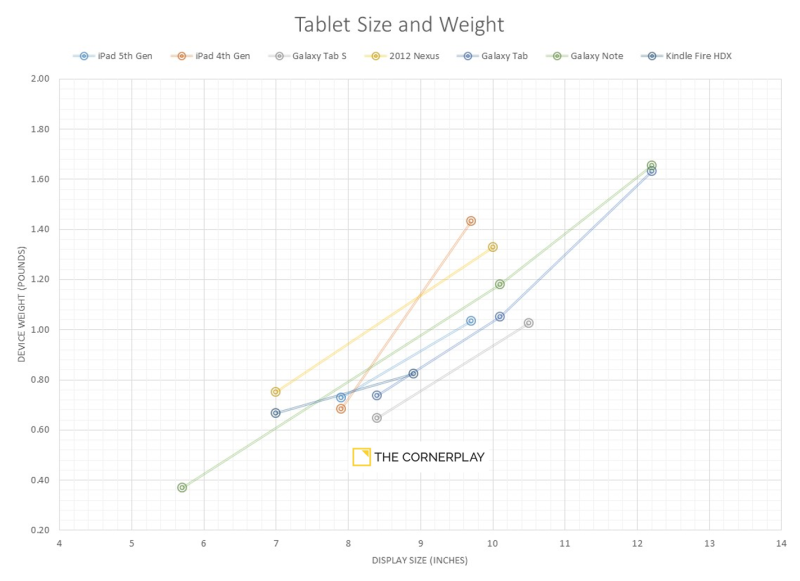 Think of the weight-to-screen delta as the slope of a line chart above.

Unfortunately, this ratio increases with screen size. Going from a Galaxy Tab Pro 8.4 to 10.1 for example is 0.19, but going from 10.1 to the 12.2 “Pro” size is 0.28. We see something similar with the Galaxy Note series as well. This would explain why manufacturers haven’t yet attempted a larger tablet — it would simply be too heavy.

Fortunately, with time and with better technology, the weight-to-screen delta can only improve as manufacturers squeeze bezels, choose lighter materials, increase battery efficiency, and so on. The iPad Air is a great example of that; the slope of the previous generation iPad is double what it is today at 0.4.

I expect Apple to be more aggressive than Samsung in reducing weight at larger screen sizes. Given the current curve, I predict the rumored 12.9 iPad “Pro” to clock in at 1.5 pounds. 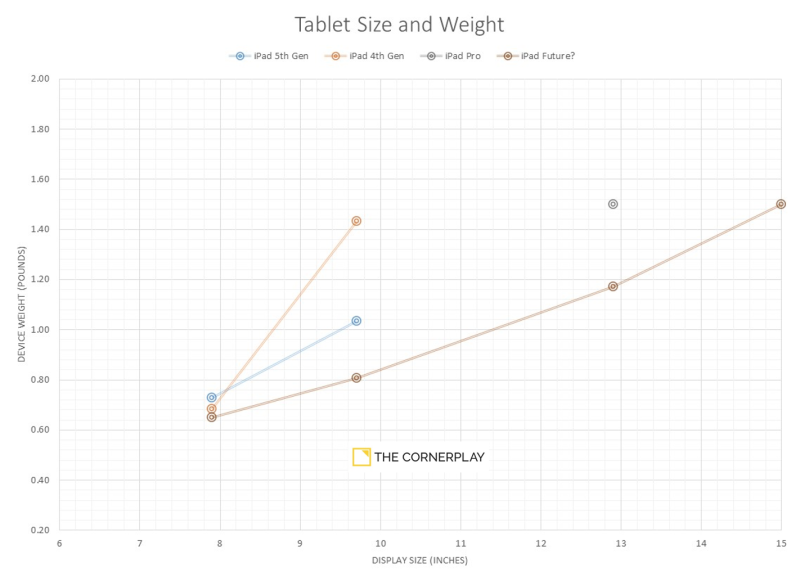 Something magical happens in going from 10-inches to 15-inches. At that screen size, the device is large enough to become the average household’s only computer (plus a keyboard accessory).

I’m not talking about fat, bulky, heavy 15-inch tablets of yesteryear. I’m talking about something thin, light and sexy, but with a 15-inch screen.

So not this generation, but in the next — when technology has advanced enough — we’ll finally get 15-inch tablets that weigh 1.5 pounds. Once that tablet is priced at $600 and below with a keyboard cover, you will start to see a massive shift away from all those 15-inch Windows laptops people are buying today.

This is where true convergence between a tablet and laptop will occur, and might even make laptops as we know it obsolete.

Apple can reverse its declining iPad sales, Google will have the chance to usurp Windows from its Android stronghold, and Microsoft will finally be able to achieve its Surface vision.

HTC is becoming like Color, the app that raised $41M and then died

Mini tablets might go the way of the dodo bird