With Microsoft in the news recently (18,000 in layoffs!), we thought we’d check in with Skype 5.0, which launched last month for iPhone and will soon debut on Android. Skype used to be the name in messaging, but in today’s mobile world the venerable brand has become an afterthought to Whatsapp, LINE and even Google Hangouts. So how does Skype 5.0 fare?

The Skype team apparently rebuilt the app from scratch with a focus on speed. I’m glad to report the new version doesn’t feel slower than its competition. It looks good too. Microsoft wisely decided to stick to one common design (Windows Phone) and apply it everywhere. One nice upgrade is that if you use Skype for both desktop and iPhone, if a message is read on one it’s automatically marked as read on the other.

However, Skype remains as unusable as ever. Why? Contacts still works like it’s from the 90s. To message a new contact, I have to first search, hope the right person shows up and then manually add her. What makes it worse is that I haven’t used Skype in a long time, so most of the contacts in the “people” section are outdated.

My contact list in “people” is outdated and I can’t be bothered to manually add everyone I know, so the people I can easily message is limited

Hello Skype team, have you not used any modern phone messaging app? Why can’t Skype use our address book to automatically manage contacts in “people”?

It might be that loyal Skype users have carefully cultivated their contact list over the years, but most rely on the “recent” section for ongoing conversations; not unlike in Whatsapp and LINE. Instead, it’s best to have the “people” section contain as many contacts as possible so messaging someone requires fewer steps, and that’s easily accomplished with the phone’s address book. 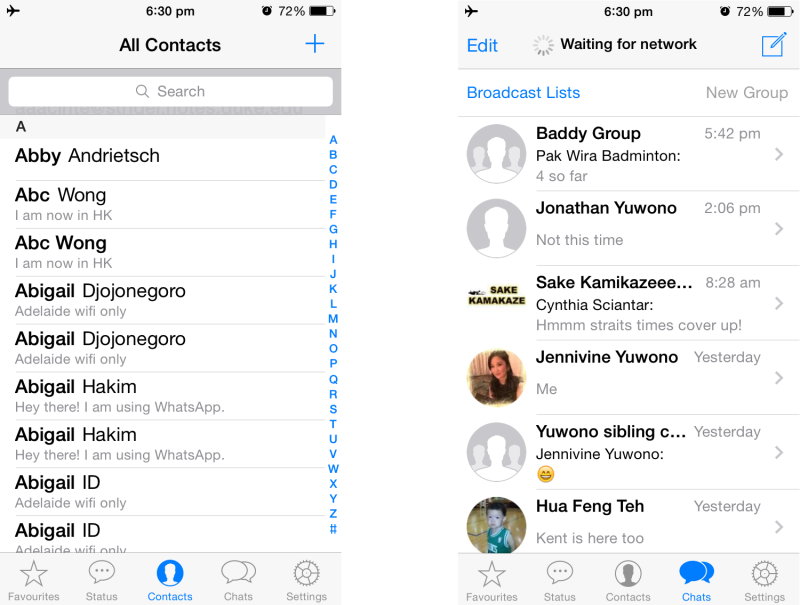 Compare Skype to Whatsapp, where the contact list is exhaustive and continually updated via the address book; this makes it easy to pick a contact to message

Searching and manually adding contacts is way too old school. It’s too much effort to find which friends I can message with the way Skype is set up. The reason why Whatsapp and LINE have been able to grow so quickly is because they don’t force users to build that contact list one by one.

Until Skype makes this change, it won’t be competitive.

Come on Skype team, it’s easy to do and it will make a world of difference – especially to those new to the service or returning to it after a long hiatus.

Update (July 25, 2013): Skype 5.0 was released for Android a couple days ago.  Skype’s PR was nice enough to let me know, and also that Skype will be adding address book functionality.  The blog announcement is confusing though as it implies address book integration is already live, but it doesn’t seem to be so; at least for me on both iPhone or Android.  Moving too slow Skype team.

Here's an NSA-styled conspiracy theory about Yahoo and Flurry