About Microsoft/Lumia Android smartphone rumours. MS adopted VM for execution of Android apps on WP. All Lumia devices will support it

GigaOm says the tweeter is “Eldar Murtzin, a long-time industry insider who has a few correct predictions to his name.”

The writing is on the wall for Windows Phone.  Even though Microsoft made significant inroads with the Lumia 520, that opportunity is rapidly closing with all the high quality, low price Android phones being sold at razor thin margins from Chinese manufacturers like Oppo, Huawei, Xiaomi and Lenovo.  The Android One program might be the killing blow.

Unless something changes, we don’t expect Microsoft’s share of smartphones to ever break double digits.  That change might be putting Android apps on Windows Phone.  Here’s how that could theoretically kick off a virtuous cycle of growth.

Microsoft might bill itself as a devices and services company, but in reality the Redmond giant has always been about platforms.  They entered hardware only because they thought it was necessary to defend the platform: Surface for Windows; Nokia for Windows Phone; Xbox for whatever platform will rule the living room.

If Microsoft allows Android apps on Windows Phone, there is a great risk developers will abandon Microsoft’s app platform altogether; there is little incentive for developers to code for Windows Phone when developing for Android will simultaneously do the job.

So how can Microsoft benefit from this?  Here’s how: 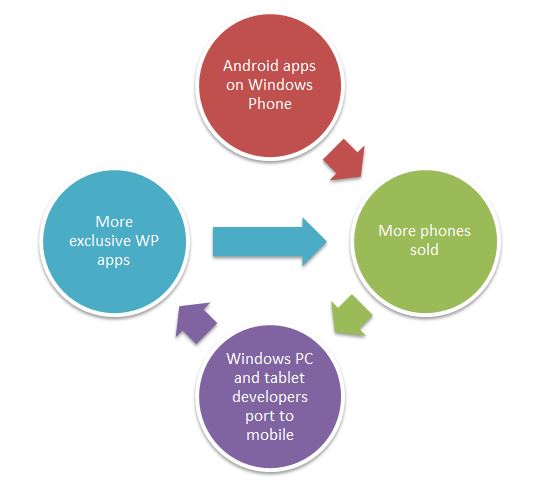 Now let’s rewind to the beginning by unbundling the smartphone: hardware, OS (launcher, navigation, look and feel, etc.), services (mail, calendar, maps, etc.) and third party apps.  For Microsoft to give up on app developers, it must believe that its combination of hardware, OS and services is superior enough to sell more phones, which is step one in kicking off a virtuous cycle.

The reason Android apps didn’t help Blackberry is because hardware and services for consumers were so weak, the theoretical parity in apps didn’t help.  So let’s unpack that for Microsoft.

Hardware: Microsoft can certainly claim Nokia hardware is superior to that of other phones, especially in photography.  Unfortunately, HTC had arguably the best Android hardware the last two years and it’s still struggling to make a profit.

OS: I love the Windows Phone experience personally, and the Modern tile launcher is the most beautiful on the market.  However, this area is somewhat commoditized in all the different ways Android users can customize their OS experience.  And even then, a growing and vocal minority feels the stock Android experience is best.

Services: Microsoft has a competent set of mobile services; but Google still edges Microsoft with better maps and search.

If the Lumia Icon can run Android apps — and let’s assume it can run those apps flawlessly — it may not vault to the top but it will be in the running.  So a fair characterization of Microsoft’s offering in hardware, OS and services might be that it’s good enough to sell more phones.

Microsoft doesn’t benefit much from selling actual phones; margins are thin unless you try to compete with Apple.  Perhaps Microsoft believes losing the app platform to gain ground on services is worth it?  We don’t think that’s the reason given Microsoft is already fighting that battle on Android and iOS.

In the end, Microsoft is not making this move for Windows phone but for Windows tablet and PC developers.  If Microsoft can achieve say 10% market share, that will be incentive for those developers to port versions of their apps to mobile.  That inflection point can kick off a virtuous cycle.

If Android apps can run well on Windows Phone — and that’s a big if — it’s not much different to the situation on game consoles.  Most third party games appear on both consoles so each console can only differentiate on what’s exclusive.  Microsoft can gain ground on that basis.

Android apps on Windows Phone is a major implementation challenge because Google has done as much as it can to tie apps to its Google play services; for example, feecha requires you to have Google play installed to run.  Microsoft would have to devise a way to accommodate these dependencies if it wants to truly achieve app parity, and it must ensure its own services are competitive.

So the strategy in summary:  Offer Android apps on Windows Phone and hope that with app parity, the combination of better hardware, OS and services will convince people to buy more Windows Phones; such that Microsoft can achieve sufficient mass so tablet and PC developers will port their products to mobile.  This leads to more exclusive Windows Phone apps, which would in turn makes Windows Phone more attractive.

Get the virtuous cycle going no matter what it takes, even if it means helping your rival.

Android Wear launches, but not with a bang

Play Super Nintendo games on your big screen TV for $55