Then Mark Zuckerberg debuted the news feed.  Instead of having to check each person’s profile to see what’s new with that person, your friends’ updates were all pooled into one page.  People then consumed the news feed regularly, and only visited an actual profile when they wanted to go in depth on a person.  This was a fundamental shift in how people used Facebook and it’s hard to imagine going back the old way.

Profiles are static while the news feed is dynamic.

Profiles are “what is” while the news feed is about “what’s changed.”

Profiles are X, the news feed is ΔX.

I hope this distinction makes sense, because I’m about to apply it to mobile phones.

What’s the equivalent of the news feed on mobile phones?  The notifications feed.  Notifications are basically what’s new about apps. 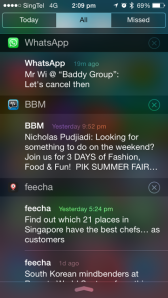 So what’s interesting is that Facebook became much better when the news feed replaced profiles as the main method of navigation.  But on mobile phones, navigation is still mostly app icon-based.  Is there a future where notifications is the primary way of using a phone?  Instead of home page filled with app icons and then having to tap each one to use it, why not a feed of what’s new for each app?

This is already how I use content apps; the trigger to access an app comes from the notifications feed, not from the home page of app icons.

(Side note: how annoying are those red circle numbers on iOS?  Sometimes I open an app just to get rid of it.)

Of course, there are important differences between mobile phones and Facebook.  App developers have an economic incentive to be seen on your notifications feed as much as possible, in a way contrary to your natural interests; whereas friends are more likely to post honestly about their lives, in a way consistent with your desire to connect with them.  Not all apps have new content — some are strictly utility-based, relevant only when needed.

Nevertheless, I think the notifications feed is the future.  It will be how people use their mobile phones more and more, and it will be a battleground for app developers to grab your attention.  iOS8’s updates for notifications affirms that trend.

The interesting corollary to all this will be how the phone OS helps you manage that process; to ensure the notifications feed is relevant and not overwhelming.  This is an issue that even Facebook is struggling with as it continually adjusts its news feed algorithm.  Here, Android is ahead of iOS in grouping multiple notifications from one app into one thread (e.g. see Hangouts messages below).

Windows 8 and Windows Phone 8 took a half step in this direction, combining app icons with one notification each.  However, the implementation is flawed in that tapping the app icon doesn’t necessarily lead you to the notification’s content, which sucks.  So for Windows Phone 8.1, Microsoft added a notifications feed similar to the ones in Android and iOS.

feecha was built on the same principle of X vs. ΔX.  We don’t compete with Foursquare or Google on X — they already have a deep database of places like the locations of restaurants and cinemas, or even that one place is better than the other.  feecha is not about X, we are about ΔX.  We want to be the app to tell you that a rat infestation broke out in this restaurant, or there is a movie premier party at that cinema this Saturday. 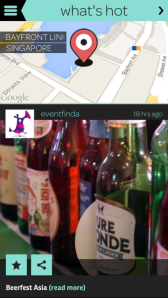 What’s there (X) vs. what’s happening there (ΔX)

It will be interesting to see what happens with how people use smartphones.  I already rely more on my notifications feed than my screen of app icons.